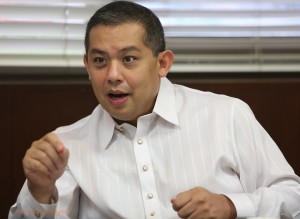 ROMUALDEZ SLAMS PARTISAN POLITICS!
• September 20, 2014
• Written by Ryan Ponce Pacpaco
• Published in Top Stories
HOUSE independent bloc leader and Leyte Rep. Ferdinand Martin “FM” G. Romualdez decried yesterday what he described as partisan politics that is once again rearing its ugly head in connection with the parking controversy hounding Vice President Jejomar “Jojo” Binay and now getting in the way of ensuring the delivery of public services. Romualdez lamented that Binay’s critics are now focusing on “trial by publicity” instead of presenting evidence before the Office of the Ombudsman over the alleged overpriced P2.28-billion 11-storey parking building.
“Again, partisan politics reared its ugly head and now affecting the concerned people’s drive to deliver better public service,” Romualdez pointed out.
He urged the detractors to focus their energy on presenting evidence against Binay before the anti-graft body and competent courts to ensure that people’s concerns are not jeopardized.
“I think politics should be set aside, we have to move on from the traditional destructive style of politicking. We should focus on building our country for the greater good of the people,” Romualdez stressed.
A plunder complaint was filed against Binay and his son, Makati Mayor Jejomar Erwin “Junjun” Binay Jr., before the Office of the Ombudsman regarding the alleged overpriced building. Being a presidential frontrunner, Romualdez said Binay will face more tirades to pull him down.
“The people have spoken and they declared based on results of various popularity surveys that Vice President Binay enjoys high trust and approval ratings,” said Romualdez.
But Romualdez expressed strong belief that Binay can weather the storm of politically-motivated tirades because these are tantamount to framing up or setting up an innocent person. “He can weather all the black propaganda for being baseless. Critics should also stop presenting lies and false, baseless, fabricated and unfounded charges against the Vice President and members of his family,” he said.
Parañaque City Rep. Gus Tambunting, a stalwart of Binay’s United Nationalist Alliance (UNA), said the detractors of the Vice President should not play too much politics because this will only muddle the issues instead of providing enlightenment to the people.
Tambunting said critics of Binay find a hard time proving their allegations, prompting them to concentrate on congressional investigation and resorting to media for trial by publicity.
Cebu Rep. Gwendolyn Garcia, a former governor, said detractors of Binay can always concoct stories to desperately pull him down in the 2016 presidential polls, but they would not succeed proving these trumped-up charges.